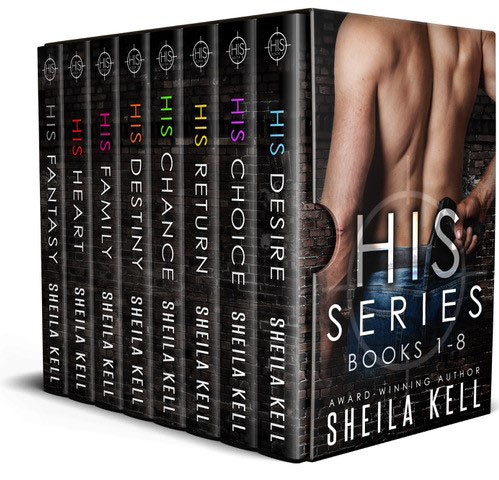 From Romantic Suspense BEST-SELLING and AWARD-WINNING Author • In Sheila Kell’s passionate novels of heat, desire, and suspense, prepare to meet the hot-bodied men of Hamilton Investigation & Security (HIS) as they do whatever it takes to protect the women who have stolen their hearts.

“The HIS series has been a wonderful series to read. I’ve enjoyed all the characters, the romance, and the suspense. From the very first page of book one, HIS Desire, to the last page of A Hamilton Christmas I was pulled in and taken on a thrilling journey.” ~ Kindle Customer

“HIS series… exciting, engaging, entertaining and I wish they were endless.” ~ Amazon 5-star review

If you like thrilling, edge-of-your-seat reading with sizzling sex scenes, then you’ll love each installment of Sheila Kell’s best-selling series.

*Books do not have to be read in order, but you’ll get the whole picture if you do!

His Desire (Book 1)
Will his stubbornness prevent him from trusting the woman he desires? In Sheila Kell’s provocative novel of suspicion and need, a handsome security specialist and a feisty FBI agent are tied by grief and attraction… and the fervor of the unknown.

He’s stubborn. She’s independent. Together, desire will determine their future.

His Choice (Book 2)
Will his choice mean certain death to the woman he promised to protect? In Sheila Kell’s passionate novel of deception and desire, a smoking-hot enforcer and a determined reporter are destined to make choices that will change everything.

Every choice requires a decision, but some choices are determined by the heart.

His Return (Book 3)
Will the actions of his past prevent him from returning to the woman in his heart? In Sheila Kell’s sensual novel of secrets and unrequited love, a wounded operative, and a strong-willed accountant have to decide if the future can only be determined by the past.

Only his return can determine her future. Will his past and her danger rip everything they love apart?

His Chance (Book 4)
What happens when one hot night in Vegas irrevocably changes his future? In Sheila Kell’s sexy novel of second chances and risks, a red-hot computer nerd and a stubborn ex-FBI agent are drawn together by an undeniable attraction and the chance to save lives.

One steamy night in Vegas will change everything.

His Destiny (Book 5)
What happens when his destiny leads him into the arms of the woman he doesn’t think he deserves? In Sheila Kell’s passionate novel of distrust and desire, a damaged man and a broken woman are connected by heartbreak and danger… and the heat of possibility.

Despite their secrets, he’ll discover she’s always been his destiny.

His Family (Book 6)
What happens when a man used to being in control has to call in his family to rescue the woman he loves? In Sheila Kell’s novella of danger and desire, a charismatic U.S. Senator and an assertive CEO are connected by the love they share. A love about to be ripped out from beneath them.

When family stands together anything is possible.

What happens when a man is called to protect the woman who captured then crushed his heart? In Sheila Kell’s story of danger and second chances, two people are connected by a painful past and a love that is threatened.

His heart is hers.

His Fantasy (Book 8)
Can one man capture the heart of the one woman who walked away from him? In Sheila Kell’s novel of conspiracies and desire, a fierce protector refuses to let go of the one complicated woman whose life he feels is threatened.

Caught between conspiracies and desire, one move could change everything.