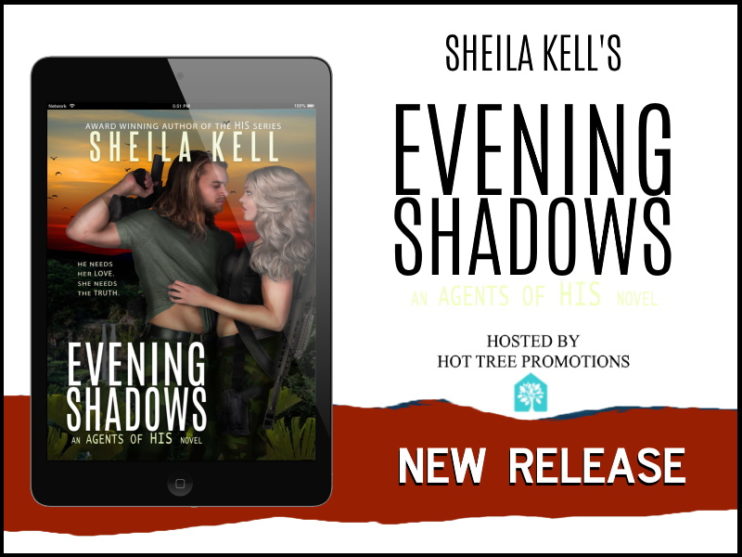 “A fantastic spin off of the HIS series starts us off with a bang…lots of mystery, chemistry, doubts, love and rocky roads to travel. Sheila Kell brings her A game back to the table with this new series. 😍😍😍😍😍”

Evening Shadows is the first book in the Agents of HIS romantic suspense series. Agents of HIS is a spin-off series of the original award-winning HIS series. Just like in the HIS series, each Agents of HIS novel is a standalone novel.

“We were talking on the plane,” Doc began, and she didn’t have to ask who with. Even before the team split, her four teammates—not included her team boss—had been thick as thieves. “Since we’re agreed he can’t go back home, we think you should adopt Cody.”

Had they heard her and Ken? She’d thought both their mics had been off. Her heart swelled at their understanding and what would be best for the boy.

“It’d be better for adoption if you were married.”

She choked on her own breath.

“Well,” Doc continued hesitantly, “since you don’t have a beau, we thought you could marry one of us.”

Her head spun trying to get around this conversation and the one her teammates must’ve had. While sweet of them, she didn’t plan to marry any of them, but she’d play this game. “Oh really. Who did you have in mind?”

No one answered right away, so she wondered if they were still fighting it out.

Finally, Franks came on the air as their apparent spokesman. “Each of us wanted to marry you.” He paused, also as hesitant as Doc had become getting nearer to this point. “But instead, we think Ken should marry you.”

Shock wracked her system and she barely noticed Ken had stiffened beside her. He probably hadn’t known their answer either. Just the thought of it tickled her belly.

“I couldn’t get enough of these guys.” –Linda Howard, Host of The Authors Show on the HIS Series.