Have you ever had a pet wander off and get lost? As a pet-owner, it can be gut-wrenching worrying about the animal especially if they are normally inside pets. If you live in the woods like I do and neighbors are not close, or within sight, the worry and guilt, because they are yours to care for, can be not only gut-wrenching but also heart-wrenching.

As many of you know, I have two cats I rescued out here in the woods. Since they kept pushing to get out the door when I opened it, I had a cat door installed. They love it. Bob, the large long-hair and star in HIS CHOICE, grew up outside so I do not worry about him. I found Ralph as a kitten outside, and he was raised inside. He enjoys going outside now but is skittish and will bolt inside when something scares him. Recently, either something frightened him when he decided to explore, or he wondered too far away and couldn’t find his way home. Unfortunately, he does not have a microchip and there is no shelter in my town that accepts cats to report him lost.

I have walked the area the past few days searching for him and found he lost his collar. One day even Bob followed behind me searching for him. Yesterday, I finally had a lead on him, and he wasn’t too far away. Later, he was spotted a mile away, but he’d been frightened by dogs and was on the run in the woods. I spent most of the day searching the new area along with two girls who had fed him the night prior. No luck. Today, I am upping the reward and having signs similar to ‘vote for me’ signs made to put out over the area since the printouts I posted at the two stop signs, the only ones within five miles, aren’t catching enough attention. Then, I am hitting the woods again. Wish me luck in bringing Ralph home! 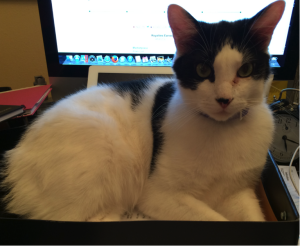