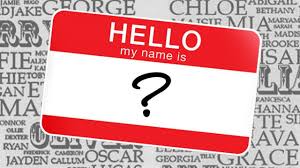 Choosing character names can become a fine art to some, but my process is less challenging. Besides what I think of, I create character names from two primary sources. First and foremost, I steal from television. I watch the news a lot and there are plenty of guest experts whose first or last names I write down to use. No, I don’t write them all down, just the first or last names that grab me.

My second source, and most fun, is readers in my Facebook Reader Group. I’ll ask them to help name a character and they don’t hold back. Sometimes, I’ve kept suggestions for future character names. I’ve even used some of their names.

Now, with what I think of and these two sources, I still sometimes have a difficult time naming a character. That’s when I call in the big guns—my mom. She’s great at thinking up names on the fly.

So, I choose character names from what I think of, television, Facebook Reader Group, and when those fail, Mom. That’s my process.