It’s another week and another post. If you haven’t caught on yet, it’s one week author and one week personal. This week it’s personal. And, it’s about my favorite subject: my cats.

Many of you are familiar with my three cats through Facebook. For those not, let me tell you about the three rescues I live with. 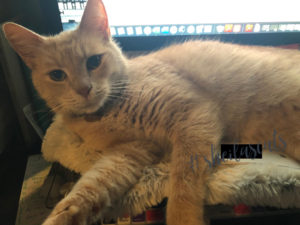 Puddles is the oldest. He is an inside-outside cat. I tried to keep him inside, but he was faster than me at the door. So, he gets to go out in the morning and returns in the evening. I think he has another family somewhere. He runs this family of cats at my house. And, if a feral cat I feed gets out of line, he lets it know. If they eat and leave him and Jackie (later) alone, he leaves them alone. When Puddles wants attention, Puddles demands attention. I have a computer riser over my keyboard for the cats to sleep on, but Puddles stands there so I can’t type any longer. He is a sweetheart and will sometimes crawl into a cling I have so I can work. Some of you may remember my heartache when he hitched a ride in the back of my unknowing handyman’s truck and traveled two counties (one to the east of me, then one to the west of me) until I brought him home. 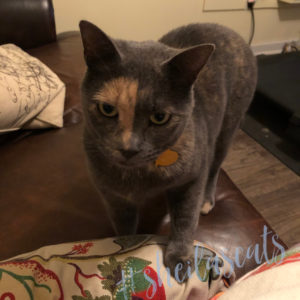 Jackie is the second oldest. Not much younger than Puddles. She gets the least amount of attention on Facebook because she likes her privacy. She is standoffish to the other cats and is an outside cat. She comes in two-three times a day to get a bite or two. Really, that’s all she eats inside. Then immediately wants to go back outside. I kept her in once and she was scratching at the window trying to dig herself out. With her obvious anxiety, I haven’t pushed the issue. She comes inside when the weather is bad and somehow is fine with being indoors. She’s my mouser. She brought one in on a rainy day and I watched her corner it and recapture it. I almost expelled her from the house for letting it go to play with, but she redeemed herself with the ultimate capture. Plus, I missed her carrying it when I let her inside. Although, she wasn’t happy when I tossed the dead mouse. I watched her once catch a bird. I felt bad for the bird but was impressed with her skills. It showed me why she ate so little inside. 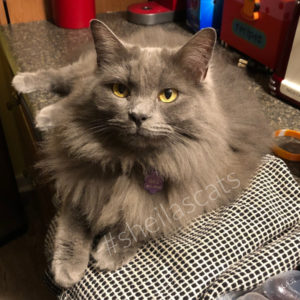 Camilla is the baby. Two teens gave her to me after they found her on the side of the road. She barely fit into both of my hands. After a quick visit to the vet, she became special to me. She is a strictly indoor cat. She was also an inside-outside cat, but she started gaining weight, so I had to cut out her hunting and put her on a special diet. She and Puddles play all the hours he is home. The rest of the time she follows me around. She sleeps in a cat bed on my desk while I write or play around on the computer. There is a small counter that I don’t use for food prep. She’s claimed it when I cook. She knows the line she can’t cross. I take things I open to her to sniff. That’s all she wants to do is sniff. That includes my water bottle. She sleeps on the end of my bed and anytime I wake – even in the middle of the night on a half wake – she jumps on my chest or side for me to pet her. That doesn’t make me love her as much. Then, in the morning, when I’m really waking and she does it, I love her all over again.

All right, that’s my three furbabies. All rescues and all spoiled. I admit that they keep me entertained and keep my heart warm. I used to be a dog person, but after having these three – and others I fostered – I’m strictly a cat person. I did try twice to bring in a puppy and a small dog into the family. The cats were so scared – even of the puppy – I couldn’t keep them. Thankfully, I found good homes for both.